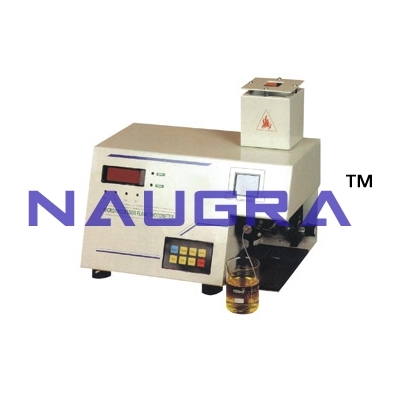 
Microprocessor Based with Printer Interface

Direct Results in ppm and meq

In case of power failure, the gas cuts off automatically.

In case the flame goes off accidently during work, the flame failure alarm sounds after few seconds

Microprocessor Flame Photometers are used for the determination of sodium, potassium, calcium and lithium.

They uses the latest microcontroller technology and advanced engineering techniques so as to give enhanced and reproducibility.

They have soft touch membrane key for ease of operations.

The sample solution is aspirated through an automiser.

Sample, Air and the fuel are mixed in the mixing chamber which is then sprayed as a very fine mist into the flame.

The color of the flame is changed depending upon the concentration of elements present.

Radiations from the flame passes through the sensing system and specific narrow band interference filter which permits only the characteristic radiation to pass to the photo-detector.

The output of the photo-detector is then processed by the microcontroller and the final results are displayed on the 20 x 4 line alphanumeric lcd with backlit.

In both models 5-Point calibration facility and non-linearity correction is provided through an automatic curve fitting software.

Facility has been provided for re-standardization with a single standard, thereby, eliminating the need of the multiple standards once a calibration has been performed.